[Back To German Version]

Hello! I´m very glad to have the possibility to do an interview with you!
How are you, and please can you introduce yourself a little bit to our readers?

Hi. I´m very fine. I hope you are the same.
I am a Norwegian composer, producer, and teacher in ancient Nordic music history.
I compose music mainly on historic instruments available in the Nordic regions about a thousand years ago or more. I also include scales and musical traditions of the areas where these instruments originate.

Some years ago, you were part of WARDRUNA! How was this time for you?

I loved traveling with WARDRUNA! Einar and his team are so pleasant to work with, and I have never before worked with a project where everything is so smooth and well prepared.

How much has the collaboration with this band influenced you?

As a performing artist, I have learned a lot from working with WARDRUNA. Most large productions I have worked on before have been in fixed locations. To see how smoothly the WARDRUNA- production can travel has been amazing!
Also, as a musician, I have gained from this. Most projects I have been working with are rooted in improvisation. To go back to where I came from and perform music pre-composed by someone else was scary. But Einar´s approach to music is very similar to my own. This time, it was quite a different experience than the classical scene where I grew up. I must admit that discovering that you can achieve such a similar spiritual experience from approaching music this way was an eye-opener for me.

Nordic folk is nowadays more popular than ever! What do you think, why?

We live in a world more and more based on technology, where we spend more and more time away from what really matters. This is happening worldwide, not only here. Artists are looking to the past to find back the connection to Earth, to ourselves. I think that this music, created on instruments with organic sound, not fine-tuned to perfection, speaks to us at a different level.
For me, music that is time-aligned, pitch-corrected, and compressed to “perfection” feels like a shell without a soul. It does not speak to me. Instead, it often makes me feel discomfort. I think this may be the reason why more and more people are seeking this kind of music.

Also, on your new album “Ferd” you follow the way of Nordic folk!
How long did you work on your album, and was this only your work?

Ferd (Journey) is a journey to me in many ways. The album is a collection of compositions I made for many different projects throughout my time. The idea was to release some of my previously unreleased material composed for short- films, theatre, and similar. I will most probably keep my focus on these kinds of sounds in the years to come. Therefore, I decided only to include pieces mainly composed for ancient instruments found in the Nordic regions to “round up” more than twenty years of work in this genre.

I composed all songs, but some needed something more to work on their own, as they were written as atmospheric- sounds for films, where the focus should be on the story rather than the music.
Therefore, I invited other artists in. Some to perform parts previously programmed, some to create new focus to make the songs stand out on their own.

Is there a special story behind “Ferd”?

Yes, or at least a primary focus.
All tracks focus on cultural exchange in the ancient Nordic world. It celebrates those that traveled the world and brought new impressions, traditions, and objects back home. But it also honors those left behind, keeping the homeland running, living in constant fear that they would never see their beloved ones again.

Sometimes there is also a female vocalist part of your music! Who is this lady? What interesting facts can you tell us about her?

There are actually four female and three male vocalists on the album.
On Kyst (Coast): Here, you can hear the voices of Ruben and Rachel from AGDIR/ BLOT. Ruben also plays one of the tagelharpe- parts on the song, and he made both videos for the album.
Storebjørn (Big bear, Ursa Major, Keeper of the forest): You can hear Marit Hætta Øverli from MARET.
Marit and I are working together on a project where we teach school- children about the Sami people´s traditions and myths. She is a fantastic singer and knows the ways of joik from her own culture. Since I needed a “Bjønejoik” (bear- joik) for this song, she was the obvious choice for me.
Ritet (The rite): The main vocalist here is Gustav Holberg from ASTRALSEID, FOLKET BORTAFOR NORDAVINDEN. Gustav and I go way back and have been working together with this kind of music for more than twenty years!
Huldra (Mythic figure in the Nordic countries):
Huldra is masterly performed by Runahild Kvitbjarkan from RUNAHILD/ ASTRALSEID. She is also the one that is backing up Gustav on “Ritet.” Huldra is an old piece, and many have tried, but Runahild just nailed it!
Ferd (Journey): Here, you can hear the fantastic voices of Hilde and Espen from ELDRIM. Eldrim is another great band in the Nordic folk scene, and I knew them from before they founded Eldrim. The choice to include them in this song was also an easy one! And, as expected, it turned to magic!
Lastly, I would like to mention Martine Kraft from MARTINE KRAFT and IWASHERE. She does not sing on this album, but she is mastering the Hardanger Fiddle on the track Vestarveg (The road to the west). Also, an easy choice based on our friendship, her virtuoso skills with the Hardanger- fiddle, and her work with cultural exchange with America´s native population. This is also the theme of this song.

Most of the songs on this album are without vocals! What is the special thing for you to focus on the instruments?

As these songs are composed as soundscapes for movies, lyrics and vocals would not be suitable in the first place, as it would steal the focus from the film´s action.
Then, when I recomposed them for this album, I wanted to keep the songs open. I wanted to create a space where the listener could independently experience personal journeys, not just passively follow the lead of a text telling them what to think.
I wanted to create room for contemplation, not to force my own thoughts on the listener. 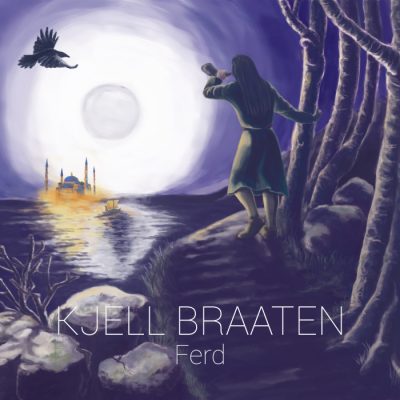 Where do you find the inspiration for your music?

For this album, I found inspiration from my knowledge about how our culture evolved and the cultures involved.
I also find much inspiration from spending time in nature, contemplating.
For this album, I also spent much time on ancient sites, taking in the atmosphere, the energies and trying to experience some of the same as our ancestors did. Watch the same views, walk the same paths, and spend time to let it all sink in.

How much influence has the feeling of ancient times in your daily life?

It´s hard to say. I live in a modern world, and I am dependent on modern technology to work as a musician and producer. Still, I am also fortunate to live close to nature and spend much time with these old instruments.
I base my life around all those factors, and it is hard to determine what is what.

Where did you find the instruments for your music?

Since the late nineties, I have been working with this kind of music. I have lectured about it for almost as long. These days, it is relatively easy to find these instruments, but hard to find the good ones, as there are many poor reconstructions. There are also many great new versions out there, but those would not work for me when I show how they actually were in my lectures.
Twenty years ago, it was quite challenging! There were a few luthiers making replicas of some of these instruments, many of them way too expensive for one that wanted to make a living from showing them to people. First, I started making them myself, but I was not very good at that, so I searched for others to help me. Soon I found some excellent luthiers with reasonable prices, and in cooperation with them, my collection of replicas have been constantly growing.

Do you have plans to play your music live?

This album would be hard to do live, as it would take many people to recreate it, but I am working on a new concept with the stage in mind.

What would be for you the most favorite place to present your music live?

Oh, there are so many!
I have been blessed to perform in many magical places in my time. I´ve performed in volcanic craters, at places like Dimmu Borgir, and loads of ancient sites and buildings. I love to do smaller events in such places but to stand on a stage with a larger audience and together create a shared experience is also a great feeling.
Unfortunately, when traveling with a full band and crew, economics plays a big part in this. You must focus on those offers you can afford.

How is the actual situation with Covid19 for you? Do you feel restricted in your creativity?

Absolutely not. Economically, it has been a disaster! I lost four months of touring and most of my yearly income. But I did get time to work on more music and help others out with their music, both as a musician and producer.
It turned out to be an extremely creative year, and I´ve had my hands in loads of good music to come.

Do you think a life similar to 2019 will be possible again?

It depends on what we put in the expression similar.
Many things will go back to “normal,” but this will also change many things. I choose to believe it will be positive.

To continue to create and to keep the studio running.
I will always stretch longer to find new angles and new ways to learn more and make new, interesting music.

And finally, can you give us some special words to your fans and our readers!

Firstly, I would like to express my thankfulness for all the incredible feedback I have had for my album!

Then I would remind all to spend time in nature (if possible) and to keep creating!
Keep your minds going by creating something. If you can´t go to your rehearsal- room, your atelier, or where you do your creative work, make something with what you have where you are.
And remember to take care of those around you.

Thank you very much for answering my questions, and I wish you all the best!